For anyone who has spent a certain amount of time in the Netherlands or around Dutch people this won`t be the first time you have heard of the concept of `lekker´. Yet the translation of this word has always been a bit of a problem. Literally it means `tasty` and originally it was used in the context of food. However, the Dutch thought ¨Why should it have only one meaning, when it can mean so much more?¨.

And that is how the infinite universe of the ´L´ word  was founded, or at least that is what they say. Nowadays you shouldn`t be surprised to hear things like  ¨…lekker fietsen…¨ (tasty cycling) or ¨…lekker weertje¨ (tasty weather). In this context the word  can roughly be translated to `nice` or `agradable`. Something pleasant.

You can extend this meaning to basically any verb, even eating. When a Dutch person says ¨Lekker uit eten¨ (Tasty out for dinner) they are actually not referring to the food being tasty, but more the action of going out for dinner being something nice. `Lekker slapen´ (to sleep tastefully) or `Slaap lekker´ (Sleep tasty = sleep well) might be the most famous examples of the combination `Lekker + verb`.

Lekker can also add a sarcastic tone to what you are saying. ¨Lekker belangrijk¨ (tasty important or nicely important?) is basically the Dutch way of saying ¨Nobody cares¨.

When you want someone to go away you could say something like ¨Ga toch lekker ….¨ (Just go and tastefully  (insert verb) ) which is a way of saying ¨fuck off¨.
The phrase ´Lekker is dat´ (tasty is that) falls into this category aswell, which is  basically the sarcastic cousin of the phrase ¨Oh that´s nice!¨

¨I finally decided to waste 20 euros on an umbrella and then it stopped raining!¨
¨Lekker is dat¨

If someone is messing something up and you want to say something really Dutch, tell them they are ¨lekker bezig¨ (tastefully busy), yet another form of being `tastefully busy` can be used in a work environement when people (like for example your boss) ask you how things are going ¨Ja, lekker. Lekker druk.¨

What I probably like most about the word ´lekker´ is how much it reflects upon the Dutch culture. Dutch are very humble when it comes to expressing something nice. ´Lekker´ is not super-awesomely epic. It´s not the most euphoric feeling in the world, but it is good, it´s nice and most of all, it´s enough and many times it expresses the exact feeling you have without having to exaggerate it to make people believe you actually had a nice experience.

What funny uses of the word ´lekker´ have you foud? Leave a comment! 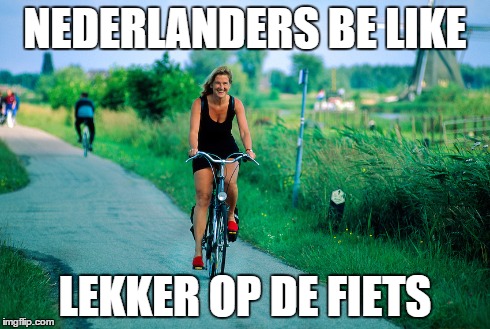 Other examples of uses the word ´lekker´

Just do ´tastefully sustainable´ and everything will be alright I sit tasty in my skin (I am feeling good)

When do you know you are fluent in a language?

This is what a Russian woman once told me. She lived in our neighbourhood and I had never really talked to her and had honestly always assumed she was Dutch, because her Dutch was normal, but normal in the sence of that it was perfect. I asked her how she did it and she laughed. ¨Honestly, I don´t know¨ she said ¨.. but I don`t really like getting compliments¨. I was sort of confused – how could one not like getting compliments about that?. ¨When someone gives you a compliment on your accent, your second language, it`s because they assume you don´t speak it at all. I on the other hand have been living here for 20 years. I have to speak Dutch every day. You can not compare me to an average Russian¨.

What she said really got me thinking. Was she right? Should I not be aiming for compliments after all? And after having thought about it for a long long time, my answer is yes. She was absolutely right. Of course there are exceptions, but in general compliments are more a confirmation of ´being on the right way` learning a language, than of you actually speaking it well. Of course, when you are in that process of learning a language compliments are great. They make you feel good, they keep you going. Yet when you really want to achieve fluency in another language, the ultimate goal is for natives to stop giving you compliments.

¨Why is this?¨ you might ask. And the answer is quite simple. When you speak another language so fluently you sound like a native speaker, people either assume you are native OR they think you already know how good you are. You would´t compliment a French person on his perfect pronunciation, or his extended vocabulary. So why would they compliment you, if you speak just as good as all the other french people?

I had an experience where me and another woman had to translate for a group of people from Ecuador. This woman had followed a course once and had spent some summers in Spain. When I introduced myself to the group I mentioned that I had lived in Panama, not specifying for how long. During this week I constantly heard these people compliment the other woman on her Spanish, and it was extremely frustrating as she was constantly making mistakes, mispronouncing things and often had no clue what they were talking about, while I had lived in a Latin-American country and felt like I was speaking quite well. On the 5th day I overheard three guys talking about us. One of the guys said he was impressed by the way the other woman spoke spanish, to which the other replied that he thought I was the one that spoke better. ¨Obviously¨ the third guy said ¨.. but she lived in Panama¨.

That`s when I realized that it was true. They didn`t give me a compliment because they considered me a native speaker, someone who obviously speaks well. The standard to which they measured me was completely different than the standard they used for the other woman.

And now that you know this, you will notice it all the time: people who are really struggling will often get the ¨You are doing great! I am so impressed!¨ while those who can speak a language without thinking about it will get no comment at all, and maybe even a correction in the tiniest mistake they do make. And there is nothing wrong with getting corrected every once in a while, it only means that you have done everything else perfectly!

Of course  if you do get a compliment this doesn´t necesarily mean you are bad at the language. Not at all! But you will see the better you speak the language, the fewer compliments you will get from the natives, so when nobody comments on your language skills, take it as a compliment!

PLEASE CHECK OUT THIS POST ON MY NEW DOMAIN

In the home country

1. ¨But why are you throwing away a year instead of going to college like everybody else¨

The southern region of Spain is very well known for it`s traditional dance; flamenco. The best city to see and live this passionate dance is Sevilla. You will find many small bars and café´s where you can enjoy this cultural phenomenon.

The music usually consists of an acoustic guitar and singing, but what makes this style so incredibly unique is the influence of arabic sounds (singing) mixed with the spanish instruments. The southern part of Spain was long occupied by the so-called Moors ( midieval muslim inhabitants of the Iberian peninsula), explaining the influence of the Arabic sounds in the flamenco music.

Flamenco is usually associated with the gitanos (romani people of Spain), and a performance usually consists of music and singing accompanied by dancing and clapping. Over the years the music and dance has grown more and more popular with many schools all over the world. For example, in Japan there are more registered flamenco schools than in Spain itself. In 2010 it has also gained it`s place in the UNESCO Masterpieces of the Oral and Intangible Heritage of Humanity list.

If you are visiting Spain, make sure you don`t miss one of the amazing flamenco shows that can be seen all over the country!

Nationality Unknown
Create a free website or blog at WordPress.com.